School Closed In Observance Of Memorial Day May 31, 2021 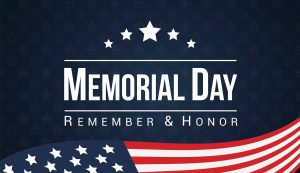 Memorial Day 2021 formally known as Decoration Day, is a federal holiday observed yearly on the last Monday of May. Memorial Day 2021 is a day that commemorates all men and women who have died while serving in the military for the United States of America.

The history of Memorial Day 2021 dates back to the American Civil War. It started as an event to honour soldiers who had died during the war. It is said to be inspired by the way people in the Southern states honoured the dead. The original national celebration of Decoration Day took place on 30 May 1868. There was over twenty four cities and towns across the United States that claim to be the birthplace of Memorial Day. Waterloo (New York) was officially declared the birthplace of Memorial Day by President Lyndon Johnson in May 1966. In the late 19th century, the holiday (previously known as Decoration Day) became known as Memorial Day and was expanded to include the deceased veterans of all the wars fought by American forces. Originally, the holiday used to be celebrated on May 30, regardless of the day of the week that it fell on. In 1968, the Uniform Holidays Bill was passed and as a result the day changed.

Traditionally Memorial Day is viewed as a time of honour and remembrance. Throughout the United States it is common to visit cemeteries, particularly military ones, and decorate graves of the deceased with flowers, small flags and wreathes. Other common traditions of Memorial Day 2021 that are still practiced today include the raising the U.S. flag quickly to the tops of flagpoles, slowly lowered to half-mast, and then it is raised again to full height at noon. The lowering of the flag at half-mast is meant to honour the fallen soldiers who have died for their country over the years. While re-raising the flag is meant to symbolize the resolve of the living to carry on the fight for freedom so that the nation’s heroes will not have died in vain. On the United States Capitol Building’s West Lawn, a Memorial Day concert is held annually and is broadcasted live around the country. Additionally, there are thousands of Memorial Day 2021 parades all across the country in cities small and large. Many will wear or put on a display of red poppies on this day as a symbol of fallen soldiers. This tradition grew out of the famous poem by Canadian John McCrae known as ‘In Flander’s Fields’, where Moina Michael conceived an idea to wear red poppies on Memorial day in honour of those who died serving the nation during war.

Memorial Day 2021 is a federal holiday and falls on the last Monday of May. The date of the Holiday changes each year but always remains on a Monday; consult the above table for exact dates.