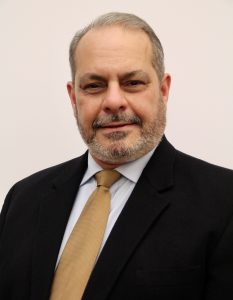 Worcester Technical High School (WTHS) is pleased to announce that its 2022 nominee for Worcester County Teacher of the Year is Mr. Michael Levy.

Michael (Mike) Levy has been an educator for almost nine years at WTHS.  Mr. Levy, teaches Criminal Justice, Forensic Science and Homeland Security and Emergency Management.  Prior to teaching, Mike acquired an extensive background in many fields of Law Enforcement.  He served 20 years, both Active and Active-Reserve Duty in the United States Air Force (USAF) as a Security Forces member, with the rank of Master Sergeant.  He retired in 2003.  Mike was recalled to active duty for both Desert Storm, and again after the attacks of September 11, 2001.  While serving in the USAF, Mr. Levy was a Phoenix Raven Security Forces member specializing in both personnel and resource protection, as well as enroute and inflight security.  He has emassed over 2000 flight hours on USAF C-5 aircrafts and has travelled all over the world.

After serving four years of active duty with the USAF, Mr. Levy joined the Ocean City Police Department (OCPD).  During his Police career, he was both a Narcotics and Criminal Investigator.  He was one of the first mounted (horse) Patrol Officer/Trainer, Tactical Team (SWAT) Leader, Police Tactics Instructor.  His last primary assignment was as the OCPD Community Services and Public Information Officer. Mike officially retired from the OCPD in 2013.  Immediatley upon retiring from law enforcement, he began his teaching career with Worcester County Public Schools.

Mr. Levy has always excelled in the betterment of all his workplace experiences.  He has been recognized as a three-time recipient of the Innovation Award in Worcester County, which awards teachers for exceptional demonstrations of new, cutting-edge technology implementation in the classroom.  Mike advanced the Forensic Science and Homeland Security programs by creating realistic and contemporary teaching facilities such as a Crime Scene Investigation Training and an Emergency Operations Training Labs.  He also partnered with various Worcester County Public Saftey organizations creating annual student internship opportunities for both Criminal Justice and Homeland Security students.

Mr. Levy believes his purpose in education is to connect students with real-life situations that foster collaborative learning environments that will create problem solving scenarios to better prepare students for future Criminal Justice and Public Safety opportunities. He has coached successful Crime Scene Investigation (CSI) and Homeland Security (HS) career pathway teams in both state and national SkillsUSA Career and Technology competitions. His teams have won gold medals at the Maryland State SkillsUSA and have placed in the top six in the nation at the SkillsUSA National competitions. Mike has taken on additional school responsibilities.  He serves on both the WTHS School Improvement Team and the Security Team.  Additionally, Mike is a New Teacher Mentor and is a Technology Coach.  He also manages the school’s Social Media sites and the School Web Page.

WTHS Principal Tom Zimmer noted, “Mr. Levy takes great pride in the relationships he has built with community organizations, which allows him to have students placed with internships with the OCPD, Worcester Sheriff’s Office, States Attorney’s Office, Emergency Services, and many more.  These internships are key for our students, and often times lead to employment opportunities.”

Former WTHS Assistant Principal Brian Phillips noted, “Few teachers reach students on the level Mike does. His combination and unique work experience and personality puts him in a position to prepare students to work in such important demanding roles as Law Enforcement and Homeland Security.”For these reasons and many others, it was clear that Mike Levy was a true standout and deserved the recognition as Worcester Technical High School’s Nominee for 2022 Teacher of the Year.

We, at WTHS, think we are pretty lucky to have a teacher of Mr. Levy’s caliber and outstanding character. During the next few months, Mr. Levy will compete with other exceptional teachers from Worcester County, Maryland for the coveted recognition of Teacher of the Year.

Worcester Technical High School congratulates Mr. Levy for being recognized as our standout teacher and nominee for this year’s recognition and hope that others acknowledge hs accomplishments and devotion as we have.